Our day began with blue skies, sunshine, and a drive to Chawama.  Chawama is a large school including pre-school through grade nine.  The pre-school and grades eight and nines are tuition-based thus helping subsidize the other grades.  Traditionally teacher turnover is fairly stable here, so I was surprised to see that six of the ten teachers are new! 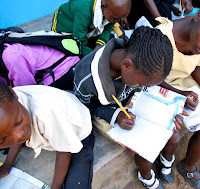 I began in grade one with the lesson about the parts of the plant.  We found a plant outside to draw as an example before coming inside to label the parts.  The grade ones needed some translation assistance from Mabuchi but most were able to understand the lesson and learn the names of the plant parts.

When Mabuchi and I walked into the grade two class we saw the grade three class also squeezed into room facing the opposite direction.  The teachers obviously try to teach each grade separately in the one confined space.  Mabuchi moved the desks so they were all facing the same way and I taught the two grades together (about 60 students total).   Again we did parts of the plant and went outside to draw a real plant.  When we returned I engaged the students using several simple engagement strategies I’ve been encouraging the teachers to use such as “turn and talk,” “think, pair, share,” and “thumbs up thumbs down.” 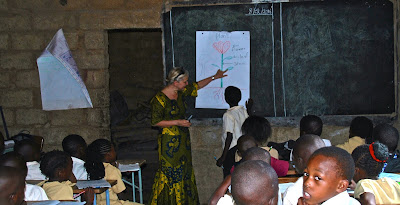 The grade twos and threes seemed to pick up the English quicker than at some other schools.  There is a little more English spoken at Chawama but I am still encouraging the teachers to do more.
The final lesson was in grade 4.  I taught story elements using the tale of The Lion and the Mouse.  It took a while to get the students to understand the elements - character, setting, problem, and solution but after using several examples from stories in which they are familiar (e.g. Jonah and the Whale, and the Christmas story etc.) we were ready to listen for the story elements in The Lion and the Mouse. At first the students had a difficult time sharing answers with one another but eventually warmed up to the idea and were sharing freely. 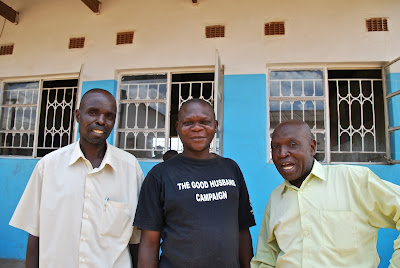 During a break I noticed these gentleman who are part of the Chawama church standing outside enjoying the sunshine.  I asked the man in the middle about his shirt (The Good Husband Campaign). He told me he is part of a group who encourages husbands to treat their wives without violence.  I know domestic violence is a concern here and in some tribes an accepted part of the culture.  I was pleased to see he is raising awareness about this issue.  Stanley, the man in the yellow shirt, told me he was the father to Makelena.  Makelena was the pre-school teacher at Chawama for many years whom I knew well. She died suddenly last year proceeded a few months earlier by her mother.  Now Stanley is raising her four children alone.
He is pictured here with the two oldest.  Unfortunately stories like Stanley’s are common here.

During the wrap-up discussion with the teachers many commented, as their colleagues at other schools observed, how much I have the students discuss the answers and participate instead of just pouring the content into the students’ heads.  After each teacher told me what they were going to practice in order to be ready for Mabuchi and I observe in a couple weeks, I spent some time with the teachers I will model lessons for tomorrow.  The grade seven teacher wants me to teacher two lessons – one on reading comprehension and one math lesson.  I agreed even though it will be difficult to squeeze five lessons into a few hours.

During our discussion I could feel the air heating up and becoming more and more humid.  Suddenly there was a clap of thunder and the rains poured down.  I can never predict if it’s going to rain or not here because the clouds form so suddenly.  Therefore I always carry my trusty Seattle raincoat wherever I go.